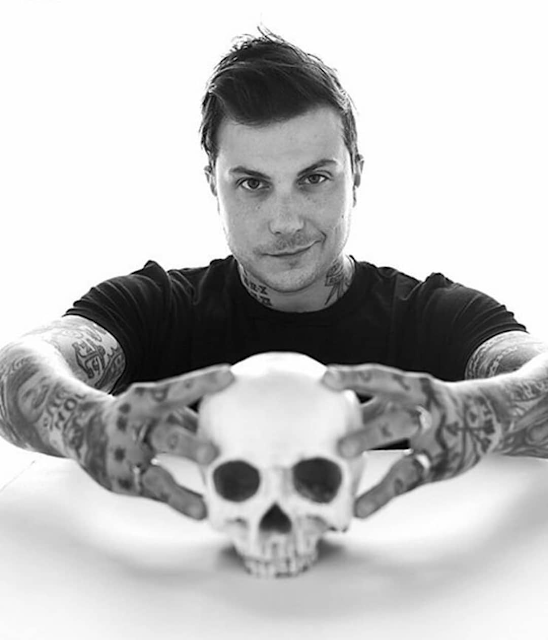 If you’ve ever rocked a fauxhawk and dyed the sides blonde or red – If you’ve ever drawn a scorpion on your neck and pierced your lip – If you’ve ever painted black XXs over your eyes – If you’ve ever looked at your eyebrows and shook your head in disappointment – If you’ve ever grabbed your best friend by the neck and told them you would f***ing die for them – If you’ve ever had a crush on a boy/girl with dirty black hair and a pixie nose – Chances are very good that you grew up wishing  you were Frank Anthony Thomas Iero Jr. (Former rhythm guitarist for My Chemical Romance, as well as frontman for Death Spells and LeATHERMØUTH… but you already knew that didn’t you? It’s okay, no need to mention Pencey Prep… Oops.)

I don’t need to go through the complications of explaining that the damn band name changes with every album. The current flock has been dubbed The Future Violents and as with all Frank’s projects, do not expect anything like his previous work. Okay, perhaps the cryptic lyrical content and general ‘I’m gonna say these things but please don’t ask me what it all means’ attitude remains a part of the man’s signature style but as for sound, we expect a different direction from the Barriers album set to drop this Friday 31 May via UNFD.
We’ve already had a taste from the single ‘Young and Doomed‘ released 21 March and accompanied by a music video. We already knew how just unbelievably cool it would be. The man is brilliant, we know this. But on the subject of the video, the nation would like to thank Iero for the ‘I’m not okay (I promise)’ reference – but seriously, dude – have you no shame? Have you no regard for MCR fans and how many hours they probably cried after hearing that?

In truth, Frank Iero has never really written songs with any thought to anyone at all besides the actual subjects of his lyrics. It almost always feels like reading his diary. All the dirtiest, darkest, most shameful actions, feelings and guilts alongside the lessons learned and the strength derived or indeed weaknesses confessed by his reflection, while 10 million MCR fans pick the words apart and try in vein to add context. Frank Iero remains to be the most secretive little bag of transparencies that has ever walked the earth.
In the end, it’s none of their business is it, Five… I mean, Frank? I guess not. Doesn’t make it any less frustrating. But I think you actually like that. So the 31st is in 4 days and the horde look forward to the lyrics which will undoubtedly be posted on your website.
Barriers was recorded and mixed by Steve Albini.  Frank Iero and the Future Violents is Frank Iero, Evan Nestor, Matt Armstrong, Tucker Rule and Kayleigh Goldsworthy. (No worries, we won’t ask about the line-up change either.)
Want to check out Frank Iero and the Future Violents? Of course you do…