Interview: We Catch Up With H. Grimace 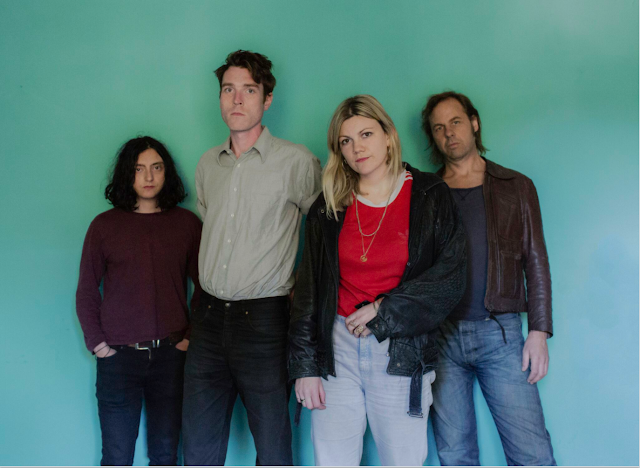 Part-punk, part-shoegaze ensemble,  H. Grimace, will be releasing Self Architect, their debut album on April 7th via Opposite Number. The album follows on from 2015’s sold out ‘I Am Material’ tape and the critically acclaimed ‘Royal Hush’ 7”, which came out last year. We chatted to front-lady Hannah Gledhill on her day off, and she had this to say:

To those not familiar with you, how would you describe your sound?
It’s an assortment of things for sure, interlinking riffs, motoric rhythms, a sort of tension and release dynamic.

What are the 5 albums that have influenced you the most?
Bill Callahan Supper, Our Anniversary was the first tune I learnt in guitar actually. The Birthday Party self titled first record.  Oh, Neil Young, Harvest made a big impression on me. Cramps one of their records Bad Music For Bad People, Women Public Strain, I’m sure these are a random selection of many but they come to mind today.

Which other artists are you into at the moment and why?
I like Uranium Club at the moment I think they are pretty funny and decent tunes, there are some lovely parts in those new songs. I love Jessica Pratt, I think her songwriting is brilliant and a kind of dissonant folk and I love that, such a pairing her voice and playing.

What’s the best gig you have ever done and why?
Best gig, there have been a lot of memorable ones!  But I think first experiences I look back on fondly, back in the early days when we were really inexperienced we played at a festival at my work and played to I don’t know 200 people and everyone was drunk and partying in the sun mostly friends and everyone was dancing and I was feeling good about that!

And the worst?
Paris, we got there after a seriously horrendous drive in a far too small vehicle with all the gear jammed in, and the drivers in Paris are insane!!  We got there just in time but none of us could use our pedals because we had forgotten we needed converters! So we ran out to all the nearest hotels shops we could find, bought a ton of chargers and played immediately after. Marcus had a wobbly and threw his guitar onto the amp, but because we had toured America for a month by then I really didn’t get too phased about that, it was dramatic to say the least!

If you weren’t a musician what would you be?
I’d still like to be a visual artist! But that is something I aspire to be along side.

If you could perform alongside any other band or artist, living or dead, who would it be?
Oh man, Iggy Pop and The stooges would have been cool! Or Joy Division were both from Macclesfield!

Do you have any information regarding upcoming releases, projects or gigs in the pipeline that you would like to tell us about?
Yeah! Our album is out in the 7th April, which is really exciting. We have an in-store show and signing in Rough Trade east on 13th April!  22nd April we’re playing Record Store Day in Nottingham, we’re playing Green Man festival this year also in August can’t wait for that!

What was your inspiration behind the name H.Grimace?
The album we did in literally 3 days with Rory, we added an extra days recording with Ben Greenberg as he was in town. We were used to doing a lot in a short space due to finances. We had two members then Asher and Shan who are still our best pals but who left last year, so all memories will be very special to me about recording and writing the album with them.
The name was a throwback to some angsty teen stuff but I also really like all the alter ego names thrown around in the 80s, Lydia Lunch, Lux Interior, Poison Ivy. It’s just a bit of fun.

If you could wave a magic wand and fix one thing about the music industry, what would it be and why?
I guess the distribution of cash, restructuring something so people who have been working for years can make a living, even a meagre one. I’m starting to retrain as being a musician is completely unsustainable. Apparently the music industry and music is one of the largest commodities going, people do want music and pay for it. But it’s stuck in the top of the hourglass and it amazes me how much productivity you can have and music you can potentially have sold with still no financial reward. A few people have spoken about this recently Laurence from Felt, and Martin Cleaners from Venus; great inspirers and completely skint. We toured America in 2015 and even as an unknown band you’re given 10% from the bar, this sustained our tour and made it possible. In England you often don’t even get paid. But we do it for the love so rant over.

Finally, how are you feeling about 2017? How do you think musicians will be affected by the uncertainty and upheaval the world is experiencing right now?
Feeling good about our music this year  – it’s a lot of work we’re seeing in a finished physical format and that feels good. We will do some shows and hopefully the music will be well received. The uncertainty in the world we are all feeling on all levels and it’s running through all industries, things are changing and the music and creativity we were inspired by getting more and more tightly bound/ it is hard to be free and inspired under so many pressures, I’m sure we will still try but it just makes for that little extra in order to do it.