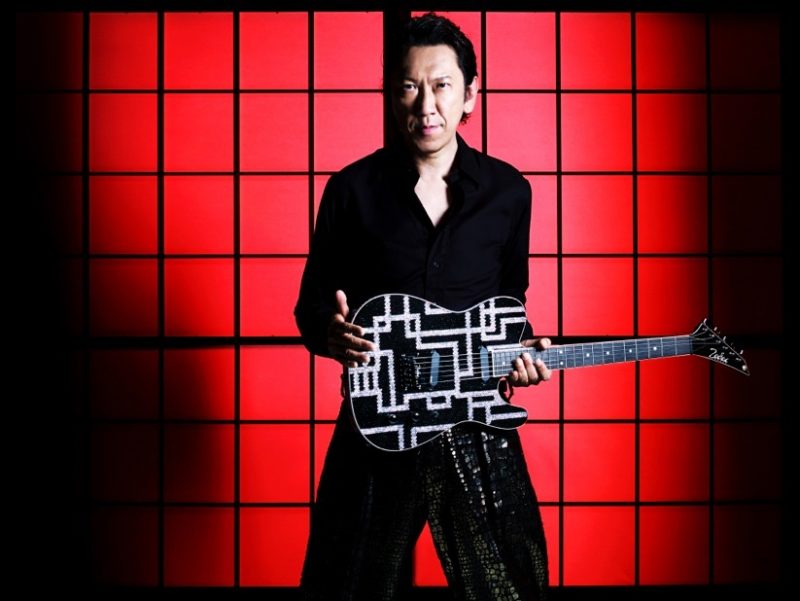 Tomoyaso Hotei’s debut UK album Strangers (Spinefarm Records) is a diverse, exuberant and astonishingly accomplished showcase of the Japanese musician’s unique approach to lead guitar playing. Flitting effortlessly between dance, electro, rock and even country-blues sounds, Strangers features collaborations with Iggy Pop, Shea Seger and Rammstein’s Richard Z. Kruspe, and is a winning introduction for British listeners to one of the planet’s most playful and progressively-minded guitarists.
We spoke to Hotei about hanging out with David Bowie, producing music for Quentin Tarantino and finding Marc Bolan more interesting than Playboy magazine…
Is it true you were inspired to play guitar after seeing a poster of Marc Bolan?

Yes. When I was 14 years old, I saw his poster in the window of a small instruments shop in my hometown, Takasaki. It was a black and white print, and it looked as if he was electrified by electric guitar, or like he was the one generating electricity to the world. I felt goosebumps when I saw it.  His expression was as if he was in total ecstasy and I thought then that the electric guitar is the most thrilling thing in the world. It had more impact than photos in Playboy magazines!  That’s the moment guitar grabbed my heart.

Would you say he is also responsible for igniting your passion for glam rock and Bowie (who you later worked with)?

Of course, I listened to my T Rex records until the surface was worn flat!  T Rex, Bowie and Roxy Music are my three favourite glam rock artists.  Marc’s music was very symbolic, but very simple. David Bowie’s was all very colourful, and I think the influence from his music built my foundations. Jimi Hendrix, Jimmy Page and Eric Clapton, they are all great, but for some reason I was always drawn to David Bowie’s guitarists: Mick Ronson, Carlos Alomer, Adrian Belew, Earl Slick and Reeves Gabriels. I always wanted to be one of them playing next to David. It is not actually an exaggeration to say that I chose guitar and practiced with such ambition for this reason: One of these days, I will be on stage next to him, I thought. And it happened in 1996, when he was on the Outside Tour and came to Tokyo.  I was fortunate enough to support his show, and I got to play on ‘All the Young Dudes’!  There’s nothing else to match that moment’s excitement.  That experience gave me such courage, I didn’t even get nervous when I played with Roxy Music and The Rolling Stones.
You are quoted as saying it is Bowie who “truly changed” your life, calling him your “eternal hero and inspiration.” We know that Bowie is widely documented as having had a fascination for Japanese Kabuki art, but how did your long-standing friendship come about?

He was like a god to me, a person from above the clouds.  I can’t describe our relationship as close enough to call him a ‘friend’.  But he was always thoughtful: every time I had a chance to see him, he always cared about how I was feeling.  He was really good at creating a warm and comfortable atmosphere for everybody. It was very magical. I never had a chance to talk about kabuki or any of Japanese culture with him, but it is well known he was a huge fan of Japan. I heard he owned a property in Kyoto.
Did your influence mark a change in musical direction for him?

I think he was very smart to create his own unique sound by mixing so many different aspects.  One minute he created a very interesting character from outer space; during his time in Berlin his sound was very heavy and dark, which I felt was like being lost in smoke. Then, later, he approached soul music and came up with something like ‘Let’s Dance’ which got everybody on their feet.  After that his repertoire included industrial music, techno, all kinds of things.  If you follow him, you can see where the market is heading.  I learned this philosophy from him:  keep molting, keep changing. His music always evolved around guitar music, and I always enjoyed playing guitar to his music, feeling as if I was next to him.
Also, what was it like being interviewed by Bowie? Not many people can say they had that privilege!

I was totally hypnotized.  I lost myself.  I took my 4-year-old daughter with me and he wanted to give her a hug, but she fought not to go into his arms! I think she’s the only woman in the world who refused a hug from David Bowie…
The only person in a world who refused to be hold by David Bowie is my daughter. デヴィッドボウイの抱擁を頑なに拒んだのは、世界でうちの娘だけかもしれない。#hotei_official #davidbowie #抱擁 #泣きじゃくる娘 #bowie #daughter #kansaiyamamoto
It must have been pretty fun hanging out with Iggy Pop during the making of your latest single ‘Walking in the Night.’ What is he like to work with?

I met Iggy in Berlin Airport after he came back from his show in Tokyo, when I was there recording in 1985. When I realised Iggy was there, needless to say I was very excited!  He was one of my heroes next to David Bowie. I was debating whether to walk up to him or not, to ask for his autograph, but it was him who approached me, and he asked me, “You are a famous guitarist from Japan, aren’t you? My girlfriend is a huge fan, would you mind giving me your autograph?”  When I finished the demos of ‘Walking Through the Night’ and ‘How the Cookie Crumbles’, I knew I really wanted vocals with a strong personality. Through my friend, I sent those demos to Iggy (via Don Was) to see if he would be interested. Fortunately, he totally loved them.  When I went to Miami for his vocal recording, I reminded him about the story from Berlin Airport and he said, “Oh! That was you?” Contrary to his appearance, he is a true gentleman, very calm.  But once he stands by a microphone, he turns into a wild beast.  I’ll never forget what he told me: “You have to feel it with your body to find a perfect space to place a lyric.”
For your latest album “Strangers” you also collaborated with Rammstein’s Richard Z. Kruspe and several other accomplished musicians. How did these relationships come about?

Matt Tuck (Bullet For My Valentine) and Richard Z Kruspe I met through a producer.  Shea Seger is my friend in London. They are all amazing artists. We collaborated not just on the musical front, but shared in depth ideas.  I truly appreciate all of them for their friendship.
Since gaining phenomenal success in your native Japan with the rock band Boøwy, you’ve gone on to experience huge worldwide acclaim as a solo artist, most notably for your song “Battle Without Honor or Humanity,” which featured in Quentin Tarantino’s film Kill Bill. Did you find the international fame you received a shock?

I wrote the song for a Yakuza movie for Japan.  When Quentin Tarantino, who is quite well known for his love of Japanese cult films, saw this movie with Robert Rodriguez, I’ve been told they had a fight over this track since they both loved it and wanted to use it for their own projects. It turns out Tarantino won. For me, he’s my idol, so when I received an offer, I was speechless and couldn’t believe it. Before this, I’d worked on Terry Gilliam’s Fear and Loathing in Las Vegas, so I’ve now worked with two of my favourite directors.  Since then I’ve been writing for various movie trailers, a theme tune for a sports program and even writing ringtones for mobile phones.  Fortunately, ‘Battle’ has been distributed to people globally, and although people may not recognise me as a ‘rock artist’ yet, when I’ve been introduced as ‘The guitarist who wrote Battle..’ then everybody becomes my best friend all of sudden! Everybody who I worked with on the Strangers album knew this track and gave me so much respect. Thank you, Quentin!   I’m totally up for you to use another one for the upcoming Kill Bill 3 film!
You’ve been in the music business for an impressive 35 years, what advice would you give to musicians started out today?

It feels like I’ve become a dinosaur. But having said that, compared to The Rolling Stones and Iggy Pop, I’m still just a little kid.  But I can tell you one thing for sure: stay humble.  I think it is okay to embrace your success, but never think that you’ve conquered the world.  Life is a winding road.  The more pain you experience, the bigger the success— that’s my philosophy.  Remember to be something different and something strange in spirit.  Stay original.
Do you have more plans for touring or getting back in the studio in 2017?

I had no break in 2016 and worked really hard, so I’m looking forward to being lazy in January. Then I will start making new music in February, followed by a European tour in April (Holland and Germany). I’m confident about building my supporters and when I go and play, I love to meet them in person.   I’m looking forward to meet as many people as possible in 2017!